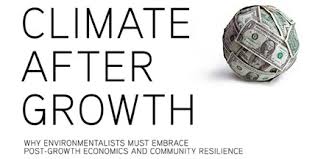 by Rob Hopkins and Asher Miller
Executive Summary
The nearly ubiquitous belief of our elected officials is that addressing the [[climate change|climate crisis]] must come second to ensuring economic growth. This is wrongheaded—both because it underestimates the severity of the climate crisis, and because it presupposes that the old economic "normal" of robust growth can be revived. It can’t.
In fact, we have entered an era of “new normals”—not only in our economy, but in our energy and climate systems, as well. The implications are profound:
The New Energy Normal. The era of cheap and easy fossil fuels is over, leading the industry to resort to extreme fossil fuel resources (tar sands, mountaintop removal coal mining, shale gas, tight oil, and deepwater oil) to meet demand. Unfortunately, these resources come with enormous environmental and economic costs, and in most instances provide far less net energy to the rest of society. They also require much higher prices to make production worthwhile, creating a drag effect on the economy. As a result, high energy prices and economic contraction are likely to continue a back-and-forth dance in the coming years.
The New Climate Normal. [[climate change|Climate stability]] is now a thing of the past. As extreme weather events grow in severity, communities are increasingly adopting strategies that build resilience against the effect of these and other climate shocks. At the same time, we must take dramatic steps if we hope to avoid raising global temperatures more than 2°C above pre-industrial levels. According to Kevin Anderson of the Tyndall Centre, this would require a 10% reduction in CO2 emissions per year, starting now—a rate so significant that it can only be achieved through dramatic reductions in energy use.
The New Economic Normal. We’ve reached the end of economic growth as we’ve known it in the US. Despite unprecedented interventions on the part of central banks and governments, the so-called economic recovery in the US and Europe has been anemic and has failed to benefit the majority of citizens. The debate between stimulus and austerity is a distraction, as neither can fully address the factors that spell the end of economic growth—the end of the age of cheap oil, the vast mountains of debt that we have incurred, the diminishing economic impacts of new technologies, and the snowballing costs of [[climate change]] impacts.
These fundamental changes in our [[peak oil and resource depletion|energy]], [[climate change|climate]], and [[economic instability|economic systems]] require unprecedented (and previously politically untenable) strategies. Yet this new reality is still largely unrecognized. As long as our leaders’ predominant focus remains on getting back to the days of robust economic growth, no national or international climate policies will be enacted to do what is required: cut fossil fuel use dramatically.
Instead of focusing on achieving climate policy within the economic growth paradigm, the US environmental community must embrace strategies that are appropriate to these “new normals.”
Responding to each of these new energy, climate, and economic “normals” will require one common strategy: building community [[resilience]]. Efforts that build community resilience enhance our ability to navigate the energy, climate, and economic crises of the 21st century. Done right, they can also serve as the foundation of a whole new economy—an economy comprised of people and communities that thrive within the real limits of our beautiful but finite planet.
Thankfully, innovations that build community [[resilience]] are cropping up everywhere, and in many forms: [[community-owned renewable energy companies|community-owned, distributed, renewable energy production]]; [[community-based food systems|sustainable local food systems]]; new [[cooperatives|cooperative business models]]; sharing economies, [[reskilling|re-skilling]], and more. While relatively small and inherently local, these projects are spreading rapidly and creating tangible impacts.
Growing the community [[resilience]] movement to the national and global scale that’s needed will require the full support and participation of the US environmental community. Specifically we need to:
By making community resilience a top priority, environmentalists can offer an alternative to the “growth at all costs” story, one in which taking control of our [[fundamental needs|basic needs]] locally has multiple benefits. Community resilience-building can create new enterprises and meaningful work, and increase well-being even as GDP inevitably falters. It can reduce greenhouse gas emissions and dependence on fossil fuels, while addressing social and economic inequities. And it can strengthen the social cohesion necessary to withstand periods of crisis.
On their own, community [[resilience]] projects can’t overcome all the environmental, energy, economic, and [[social equity]] challenges facing us. That will require coordinated global, national, regional, community, business, neighborhood, household and individual efforts. But the community resilience movement can help create the conditions in which what is now “politically impossible becomes politically inevitable.”
How the environmental community responds to the risks and opportunities of the new energy, climate, and economic “normals” will make an enormous difference in its success, and in the fate of humankind.
http://www.postcarbon.org/report/1882095-climate-after-growth#es